Business leaders benefit from teaming up with Special Forces

This blog is in addition to the following article: http://www.westwakefieldhealthandwellbeing.nhs.uk/news/local-leaders-take-a-military-approach-to-create-team-of-teams/

Strategic decision-making is a military skill which has evolved from thousands of years of warfare. Turning strategic objectives into successful battle plans and outstanding operational performance is core business for military leaders. They know how to turn strategy into action and they know what the most critical success factors are. These factors are not just useful in a military setting, they’re also applicable in a civil environment. That’s exactly why the teachings of e.g. Sun Tzu and Von Clausewitz are so widely adopted by modern political and business leaders.

Strategy, above all, is a skill and those who served in combat environments have learned the hard way that it’s a vital skill. Or as Sun Tzu starts in the opening chapter of his Art of War; “The art of war is of vital importance to the state. It is a matter of life and death, a road either to safety or to ruin. Hence it is a subject of inquiry which can on no account be neglected.” Everybody can imagine what neglecting in this regard could mean on the battlefield: Casualties, annexation and even annihilation. But what happens if you would replace “state” by “organization”? Then you’ll probably see that negligence could lead to firing people you need, losing profit or market share and even hostile take-overs or bankruptcy. The essence of this skill is to prepare extremely thorough for the actual ‘battle’ as every battle is won before it is fought according to Sun Tzu.

The leap of approximately 24 centuries between Sun Tzu and general Stanley McChrystal (author Team of Teams) isn’t as big as you might expect. Just as the leap between a military headquarters and a business boardroom isn’t. Despite that, just a few crossovers have been made so far and this attached article is a rare but good example of it. The reasons are simple: As our military has extreme focus on (inter)national peace, safety and protecting trade interests, they’re not available for widespread dialogue and teachings to civil leaders. Fortunately there’s an increasing amount of private organizations, run by former military personnel, taking on this challenge.

The McChrystal Group is working hard and smart to connect the military and civil world by sharing knowledge and experiences back and forth. When general McChrystal got his most challenging assignment; leading all Special Forces units to end the War on Terror in Iraq and Afghanistan, he stepped out of the comfort zone and broke with traditional formats, doctrines and ways of look at things. In fact he did what Sun Tzu already told him 24 centuries ago. He also did what companies like NASA, US Postal Service and other civil organizations in desperate need of success did. They started with the end state and created a thorough and winning strategy to achieve it.

In a military setting there is a gradation when it concerns the level of professionalism. The best trained forces get the most and toughest assignments. Special Forces are not just special because they come in small numbers, they’re special because they do what they have to do, regardless the numbers. It’s all about unity, strength and dedication. Core values in combination with the right mindset. If you have the choice of teaming up with military experts on strategy and the ways of turning it into operational excellence, wouldn’t you choose to work with Special Forces in Business? 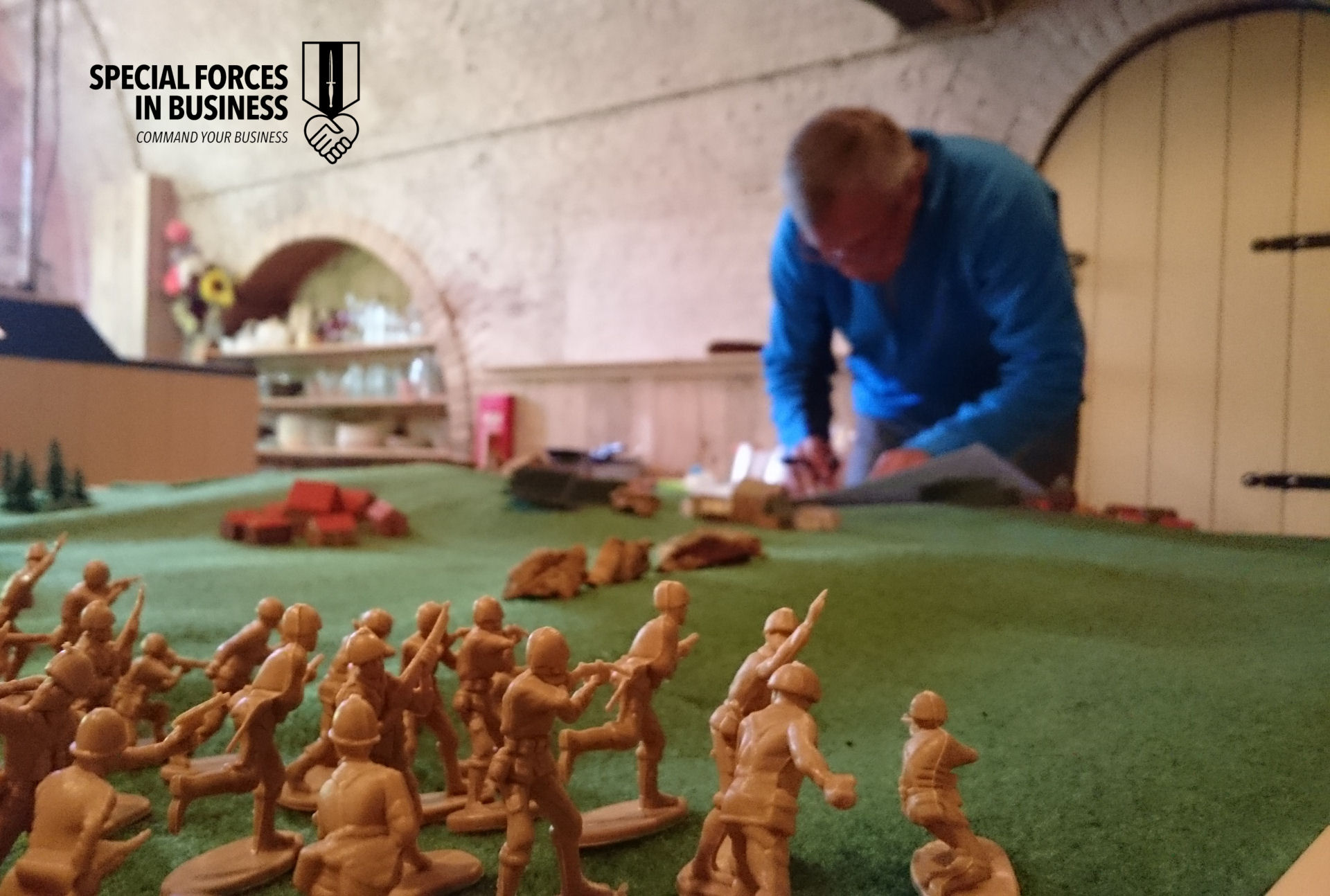 Wartable sessions with your staff are a perfect way for good preparations and making sure you don’t overlook anything on the upcoming battlefield.

De waarde(n) van een wartable
Change is inevitable
Special Forces training: It is all about trust and loyalty